Immune checkpoint inhibitors (ICIs) and molecular targeting drugs used against oncogenic drivers, such as EGFR or ALK, have dramatically changed the treatment of NSCLC.1-6 However, treatment options after those drugs are still limited, and cytotoxic anticancer drugs are the mainstay of subsequent treatment. In addition, because platinum-based combination therapy is the most successful combination with an ICI, platinum-based combination induction therapy and subsequent maintenance therapy are still widely used.7-9 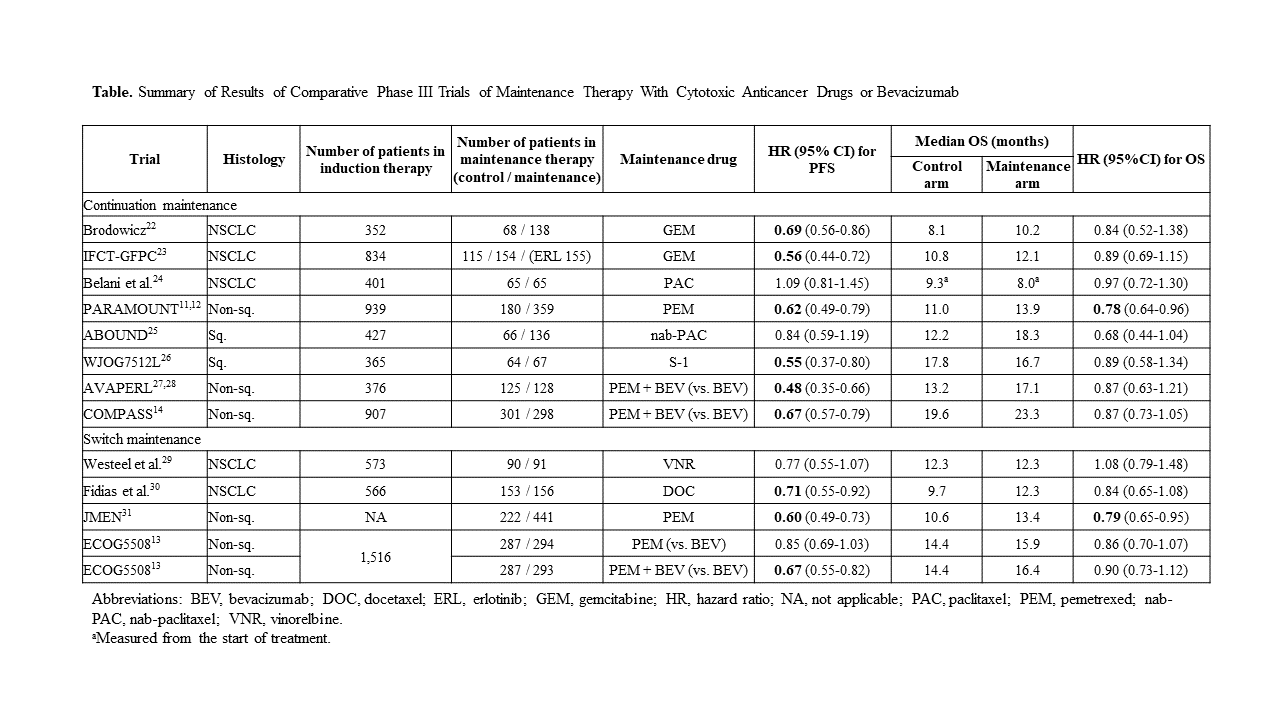 Maintenance therapy for nonsquamous NSCLC is still an indispensable part of cancer management. On the basis of the above results, we must decide which induction therapy and which maintenance therapy should be administered to maximize patient benefits.

The Era of Immune Checkpoint Inhibitors

In addition, platinum-based induction chemotherapy and maintenance therapy is important as a first-line treatment for patients with contraindications for ICIs, such as autoimmune disease and interstitial pneumonia.

Preclinically, it has been suggested that pemetrexed induces cancer immunity through immunogenic cell death.20 On the other hand, it has been suggested that bevacizumab, an anti-vascular endothelial growth factor antibody, alters the cancer microenvironment and tumor vessels to induce cancer immunity.21 Therefore, it is expected that there will be beneficial effects of using an ICI in combination with these drugs in not only the induction phase but also in the maintenance phase.

We are currently conducting the APPLE study based on the experience of treatment development in the COMPASS study (Fig.). The purpose of this study is to evaluate the effects of adding bevacizumab to carboplatin/pemetrexed/atezolizumab combination therapy. We will promote the development of treatments that further enhance the effects of ICIs by combining pemetrexed and bevacizumab with ICIs.

Approval of Combination Ipilimumab and Nivolumab for Mesothelioma: What Happens Now?

Mutation or Amplification: Who MET the Expectations?

RET Therapy for NSCLC, a New Generation of Inhibitors

Lorlatinib in ROS1-Positive NSCLC: A Review of Recent Data