An IASLC multidisciplinary panel led by Pathology Committee members and assisted by experts in thoracic medical oncology, thoracic surgical oncology, and radiology recognized this practice gap; and took on the task of reviewing published literature and writing recommendations for pathologic assessment of resected lung cancer specimens following neoadjuvant therapies. Their report was reviewed by the entire IASLC Pathology Committee and the membership of the Pulmonary Pathology Society before it was distributed electronically by the IASLC office for public comments. The document was also reviewed by the U.S. Food and Drug Administration (G. Blumenthal); the European Medicines Agency, The Netherlands (R. Herold); the Office of New Drug, Pharmaceuticals and Medical Devices Agency, Japan (K. Kiyohara); and the Office of Clinical Evaluation, Center for Drug Evaluation, National Medical Products Administration, P.R. China (Z. Yang). The full report was published in the Journal of Thoracic Oncology.5

The IASLC guideline details a standardized approach to gross processing of lung cancer resection specimens irrespective of the type of neoadjuvant treatment—chemotherapy, chemoradiation, targeted therapies, or immunotherapies (Fig. 1). The document also provides definitions of major pathologic response (MPR) and complete pathologic response (CPR). The historical definition of MPR for all histologic types of lung cancers—10% or less viable tumor—–has been adopted in the current College of American Pathologists synoptic reports for primary lung cancers and by the Royal College of Pathologists. The 10% or less cutoff has been recently challenged by new data: A review of 272 resection specimens suggested that the threshold rate of viable tumor for MPR may be different for adenocarcinomas (65% cutoff) and squamous cell carcinomas (10% cutoff).6 However, the IASLC panel recognized that additional validation studies are needed before different cutoff points can be recommended on the basis of histologic type of the tumor or the type of neoadjuvant therapy administered. The IASLC guideline proposal includes an updated, detailed synoptic template for reporting pathologic findings in neoadjuvant cases that we hope will be adopted by the College of American Pathologists and used by pathologists worldwide. 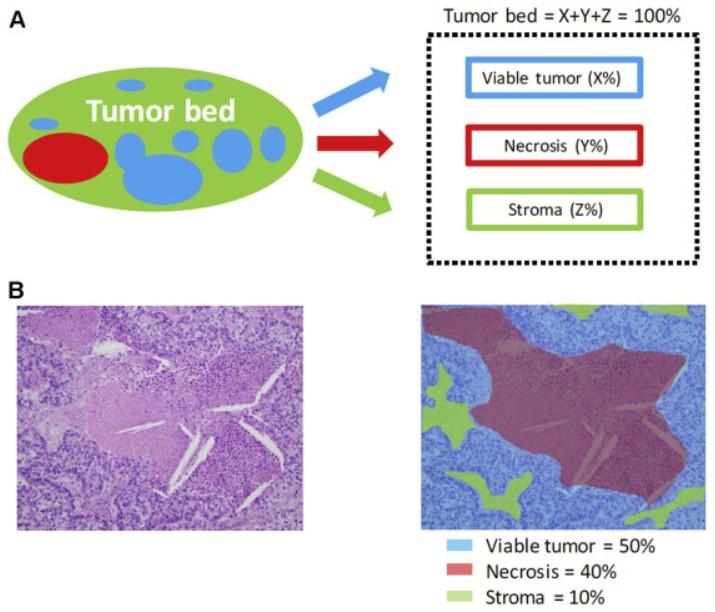 A simple and uniform approach is recommended for microscopic evaluation of the area where the original pretreatment tumor was located (i.e., the tumor bed). It suggests reporting and quantification of the major components of the specimen: viable tumor, necrosis, and stroma (which can include fibrosis and inflammation; Fig. 2). Estimations of the three components should add up to 100%. The panel noted that the same histologic changes can be seen in tumors from patients who did not receive neoadjuvant therapy; however, none achieved MPR or CPR without induction therapy.7 Therefore, it is essential that surgeons communicate the treatment history to pathologists at the time of intraoperative consultation and/or on the requisition form. Otherwise, these changes may be considered to represent native tumor features rather than response to neoadjuvant therapies.

In this proposal, the term “tumor bed” is preferred rather than “regression bed,” which has been introduced for neoadjuvant immunotherapy.8 Tumors treated with checkpoint inhibitors can show features considered to reflect immune activation such as proliferative fibrosis, neovascularization, cholesterol clefts, high number of tumor-infiltrating lymphocytes, and tertiary lymphoid structures. Cottrell and colleagues reviewed 20 resection specimens following neoadjuvant nivolumab, and they proposed immune-related pathologic response criteria (irPRC), for which percent response is calculated as residual viable tumor (RVT)/tumor bed, where tumor bed includes RVT plus regression bed plus necrosis. These criteria have also been used in the proposed Pan-Tumor pathologic scoring system. The morphologic features of the regression bed as proposed for immunotherapies are also applicable to stroma of tumors treated with other types of neoadjuvant therapies and, therefore, are included in the IASLC proposal for stromal features. However, the stroma may have other appearances that are more like native tumor stroma, and these are included in the proposed criteria as well. The panel felt that pathologists, including specialists in thoracic pathology, cannot reliably distinguish these features in every case. The proposed immune scoring system includes intratumoral stroma as residual viable tumor in cases without features of regression. This is in contrast to the IASLC proposal that recommends including only viable tumor cells as residual viable tumor, whereas intratumoral stroma is considered stroma.

Today, we don’t know if different scoring systems will be needed for different types of neoadjuvant therapies. No studies or series directly compare the predictive value of these two systems. Furthermore, there are very limited data about the diagnostic reproducibility of the proposed criteria, and those that do exist come from a very limited number of cases and only a few pathologists. The IASLC is initiating a study of a large number of resected cases with and without neoadjuvant therapies to address diagnostic reproducibility and the predictive value of the proposed scoring systems.

Figures.
Reprinted with permission from Journal of Thoracic Oncology.

Dr. Dacic is a thoracic surgical pathologist and director of the FISH and Developmental Laboratory at the University of Pittsburgh Medical Center. She is the inaugural recipient of the Fred R. Hirsch Lectureship Award For Translational Research, presented at the Virtual 2020 World Conference on Lung Cancer.

Dr. Travis is the director of Thoracic Pathology, Memorial Sloan Kettering Cancer Center, and is a member of the IASLC’s Pathology Committee.

Dr. Wistuba is head ad interim of the Division of Pathology and Laboratory Medicine, chair of the Department of Translational Molecular Pathology, The University of Texas MD Anderson Cancer Center, and is a member of the IASLC’s Pathology Committee.

Improving Molecular Testing in Lung Cancer: What We Learned From the IASLC Global Survey

PD-L1 Testing for Lung Cancer in 2019: Perspective From the IASLC Pathology Committee

Tumor Mutation Burden: Evolution of a Controversial Biomarker From the Pathologist’s Perspective

Global Survey for Pathologists on PD-L1 Testing: Moving Toward Standardization