Research suggests that the draft 2020 lung cancer screening guidelines from the US Preventive Services Task Force (USPSTF) may inadvertently increase racial disparities among at-risk minority populations as compared with the older 2013 guidelines—the very thing the updates sought to remedy (MA05.10).

“The 2013 guidelines introduced racial and ethnic disparities in screening eligibility. Although the draft 2020 guidelines selected more minorities, they have similar or slightly larger disparities,” stated Rebecca Landy, PhD, of the National Cancer Institute, who presented the current research.

When the USPSTF first developed lung cancer screening guidelines in 2013 for heavy smokers, the recommendations were based on population data that included only 4.5% African Americans and failed to adequately account for racial differences in smoking patterns. As such, the 2013 guidelines were criticized for being too conservative, especially for African American smokers, who develop lung cancer at higher rates and do so at younger ages, despite smoking fewer cigarettes per day compared with white smokers.

The USPSTF guidelines underwent an update in 2020 with the explicit intention to “partially ameliorate racial disparities in screening eligibility” compared to the 2013 guidelines. Toward this end, the guidelines were expanded to include (1) ever-smokers aged 50 to 80 years, instead of 55 to 80 years, and (2) individuals who had smoked 20 or more pack-years, as opposed to 30 or more pack-years. The criterion that no more than 15 years had passed among individuals who had quit smoking remained unchanged.

To determine how well the 2020 guidelines performed in comparison with the 2013 guidelines, and whether they could still be improved, Dr. Landy and colleagues relied on empirical models. They analyzed three cohorts based on the different guidelines criteria assuming that eligible individuals would undergo three annual low-dose computed tomography (LDCT) screening scans, in tandem with 5 years of follow-up. The data for the models came from the 2015 National Health Interview Survey (NHIS), which is representative of individuals across the United States.

Applying the USPSTF 2020 guidelines (age 50-80, ≥ 20 pack-years, ≤ 15 quit-years) to the NHIS data expanded the eligible screening pool to encompass 14.5 million individuals, increasing the number of whites by 78% and the number of minorities by 97%. Although the ability to prevent lung cancer deaths increased across all racial and ethnic groups with the expanded screening criteria, the disparities still remained. Screening of eligible white individuals under the 2020 guidelines averted an estimated 67% of all preventable lung-cancer deaths. However, the prevention rates were still 13% lower in African Americans (54% of deaths prevented) and had increased to be 19% lower in Asian Americans (48% of deaths prevented) and 27% lower in Hispanic Americans (41% of deaths prevented).

Dr. Landy and colleagues ran a third model, which applied the USPSTF 2020 guidelines but also added in individuals with “high benefit” from screening, defined as 12 or more days of life gained with screening according to the Life-Years From Screening-CT (LYFS-CT) model (Fig. 2). This analysis encompassed an addition 3.47 million individuals, of whom 29% were minorities, bringing the total screened population to 18.0 million ever-smokers. The ability to prevent lung cancer deaths again increased across the board, and disparities between whites and African Americans were eliminated, with lung-cancer-death prevention rates reaching 82% in each group. Although disparities in preventable lung cancer deaths still persisted for Asian Americans (63% of deaths prevented, reflecting a 19% disparity) and Hispanic Americans (59% of deaths prevented, reflecting a 23% disparity), Dr. Landy noted that screening of these individuals became more efficient, with fewer patients needing to be screened to prevent one lung cancer death. 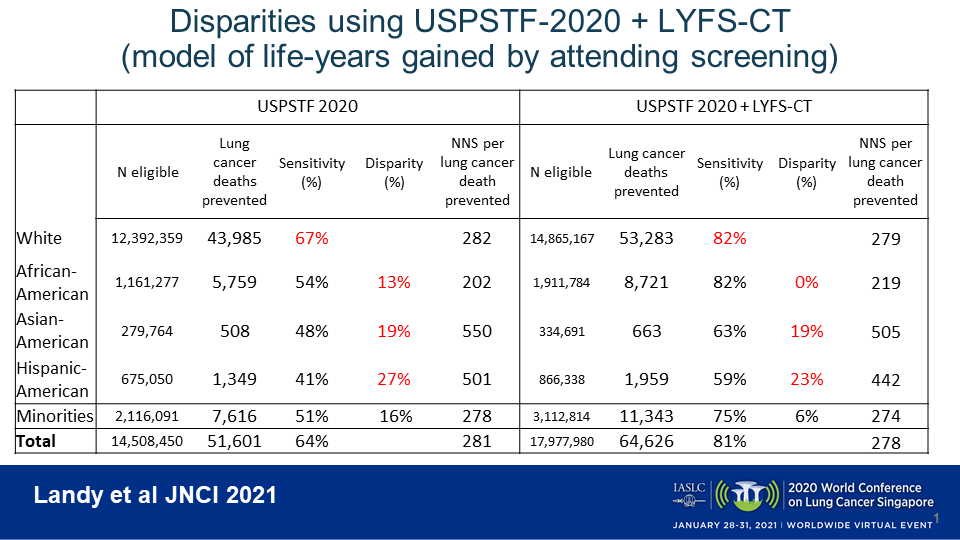 “Using a life-years-gained prediction model to identify high-benefit individuals not eligible under the 2020 guidelines may eliminate the disparity between whites and African Americans but doesn't reduce the disparity for Asian Americans or Hispanic Americans,” Dr. Landy concluded. “We think that the reason the disparities aren't reduced for Asian and Hispanic Americans is because the cancers are occurring in people who have smoked less, and therefore their benefit is less.”

More effort will be needed to overcome the remaining disparities that result from the different risk distributions between races and ethnicities.

Discussant Chai Hui Zhong, MD, of Singapore General Hospital, agreed, remarking that “these results suggest that there is a need to tailor the lung cancer screening guidelines for different populations.”

Lowering the eligibility age from 55 years to 45 years for at-risk women undergoing annual LDCT screening for lung cancer may actually cause more harm than good. Modeling data show that this approach is estimated to identify 6% more spontaneous lung cancer cases among every 1000 women screened but at the expense of a 140% increase in induced lung cancers caused by radiation exposure from the screening itself (MA05.11).

“When women of lower age are offered the screening, the potential benefits are tempered by the risk induced by screening,” concluded Yihui Du, PhD, of the University Medical Center Groningen in the Netherlands, who presented these research findings.

“Women are commonly diagnosed with lung cancer at a younger age compared to men. In addition, women are at a higher risk of developing radiation-induced lung cancer. This risk increases rapidly with younger exposure age,” Dr. Du explained.

To evaluate these tradeoffs when lowering the screening start age in women, Dr. Du and colleagues leveraged a previously validated model that simulated outcomes for 100,000 heavy female smokers (ie, those who smoke ≥ 20 cigarettes/day) aged 45 to 75 years who underwent annual lung cancer screening by LDCT. The lifetime spontaneous risk of lung cancer for the simulated population was determined to be 20%, with the risk peaking around 70 years of age based on data from a Netherlands cancer registry. The risk of lung cancer due to radiation was estimated based on the BEIR VII report, which factors in both radiation dose and age of exposure.

The investigators found that screening 1000 women aged 55 to 75 who smoke heavily with annual LDCT—the current standard, which exposes a woman to 2.70 mSv per scan—leads to the detection of 113 spontaneous lung cancer cases at the expense of 3.0 radiation-induced lung cancers. This translates into a benefit-to-harm ratio of 38—in other words, 38 women could be prevented from dying of spontaneous lung cancer for every woman in which LDCT screening caused lung cancer.

Dr. Du remarked that “ultra-low-dose CT can be a compensation” for the increased risk posed by LDCT screening when started at younger ages. For example, the benefit-to-harm ratio increased to 31 for every 1000 female heavy smokers screened from ages 45 to 75 years when the radiation dose per scan was reduced from 2.70 mSv to 1.65 mSv. This approach detected an estimated 117 spontaneous lung cancers while causing 3.8 radiation-induced lung cancers.

Although Dr. Zhong acknowledged that using an ultra-low-dose CT approach may partially ameliorate some of the risks associated with a younger screening start age, she also noted that “further research is required to evaluate this hypothesis, which may potentially have far-reaching effects on public health policy.”

Overall, Dr. Zhong believes that the data from these two abstracts suggest that “national lung cancer screening guidelines need to be individualized for different populations looking at race, ethnicity, and gender.”

In accord, perhaps it is time to look beyond age, pack-years, and quit-years as the sole factors for guiding estimates of lung cancer risk and the need for screening among vulnerable populations with vastly different underlying risk factors.

This session had a real-time Q&A that provided attendees with the opportunity to ask questions of the session participants. The Q&As are included in the On-Demand recordings, available through the virtual platform. Registration is ongoing for the next 60 days at wclc2020.iaslc.org.

Acute Admissions Rates for Lung Cancer Patients Up During Pandemic, Not Linked to COVID-19

Behind the Scenes
WCLC 2020 Archive

Behind the Scenes
WCLC 2020 Archive

Use of Predictive Biomarkers, Incorporating Chemotherapy—What Is Best When Using Immunotherapy in Advanced NSCLC?