More Than a Partnership: How Oncogene-Driven Patient Groups Are Mobilizing the Global Community to Drive Research

More Than a Partnership: How Oncogene-Driven Patient Groups Are Mobilizing the Global Community to Drive Research

It has been just over a year since we reported how oncogene-driven patient advocacy groups are disrupting the research paradigm in lung cancer.1 We have indeed come a long way since the discovery of the first EGFR mutation in lung cancer in 2004.2 ,3 Even amid the challenges of the global COVID-19 pandemic, the lung cancer field has maintained enormous momentum, with more than a dozen new drugs receiving U.S. Food and Drug Administration (FDA) approval during the past year.

Because of this rapid progress, the American Cancer Society reported that overall cancer mortality declined for a second straight year, a decline which has largely been fueled by advances in lung cancer research.4 Our understanding of the molecular biology of adenocarcinoma, the most common type of NSCLC, has led to the identification of “oncogenic driver mutations”—alterations in specific genes that can lead to the development of cancer. As of 2021, there are now FDA-approved targeted therapies for nine oncogenic drivers: ALK, BRAF (V600E), EGFR (tyrosine kinase–sensitive mutations), EGFR exon 20 insertion, KRAS (G12C), MET (exon 14 skipping mutations), NTRK, RET, and ROS1.5 Compared with traditional chemotherapy, these targeted therapies have increased survival and quality of life for patients.6

Our increased understanding of the molecular underpinnings of NSCLC has led to the genesis of a growing number of patient advocacy groups defined by their driver mutation. Since our last report, several new oncogene-driven patient groups have arisen, bringing the current number of such groups to eleven (Table; the original version was part of a presentation at 2018 World Conference on Lung Cancer7 ). Whereas most of these patient-centered advocacy groups formed and organized as drug approvals increased, some of the groups actually formed even before targeted therapies specific to their type of lung cancer were available (Fig.). As these groups have evolved beyond online communities, they have started to mobilize globally to build partnerships that provide support, increase awareness and education, accelerate and fund research, and improve access to effective diagnosis and treatment. Indeed, each of these groups is pursuing strategic, multi-stakeholder partnerships that include patient advocacy groups such as LUNGevity Foundation and the GO2 Foundation for Lung Cancer, doctors and researchers, and industry partners to drive the research most meaningful to their communities.

However, as these oncogene-driven patient groups started to organize, they quickly recognized the limitations of traditional federal funding mechanisms and research models in their pursuit to rapidly drive forward advances in these unique lung cancer subtypes. Thus, in addition to making strategic investments into new projects focused on creation of cancer models, collecting real-world evidence and patient-reported outcomes, and identifying new treatment options, some of the groups have recently convened roundtables with noted lung cancer experts to define research priorities that will sustain and accelerate meaningful progress into their particular NSCLC subtype. In short, these groups are challenging the status quo and seeking to shape and define effective new research models on their own terms. Several leaders from across the oncogene-driven groups are also working to help codify best practices for building successful collaborations between these various stakeholders, including other lung cancer nonprofit organizations.

Although several of these patient groups originated in the United States, the oncogene movement is gaining global momentum, with several of the groups creating country-specific chapters that hold regular meetings with their U.S. counterparts. This allows group members to share their experiences and learn from each other. Additionally, given the rarity of some of these driver mutations, building a global community is also important for helping to power new research studies and clinical trials. The groups are also interacting with global thoracic oncology leaders to figure out how paradigms successful in one country can be adopted by others, and more importantly, how research efforts across countries can be effectively leveraged to drive innovation.

As stated in a previous article describing the work of these oncogene-driven patient groups in lung cancer, there are times when it makes sense for each group to focus on its unique needs and challenges, and there are times when it makes sense for all of these groups to come together.8 To that end, leaders from several of the groups are working to identify cross-cutting initiatives in which the groups can collaborate to effect change. One topic that is of broad interest across all groups is the importance of comprehensive biomarker testing to ensure that all patients with actionable driver mutations are identified and that they are put on the right treatment at the right time. Recently, many of the groups have partnered with LUNGevity Foundation on its “No One Missed” campaign to amplify the urgency of making sure all patients diagnosed with NSCLC get access to this critical testing. Another area of interest is based on a recently published study supported by GO2 Foundation for Lung Cancer that found that 84% of patients with adenocarcinoma under the age of 40 have driver mutations.9 Thus, members from across many of the patient groups are participating in a newly launched study to identify risk factors that may explain why these younger individuals develop lung cancer. By participating in efforts such as these, the individual groups can help advance research that will have collective benefit for members across all the groups and multiple lung cancer subtypes.

We see these groups playing a major role in advancing lung cancer research, both nationally and internationally, as they develop and leverage cross-institutional and cross-country partnerships and disseminate learnings across tumor types that share the same mutation. 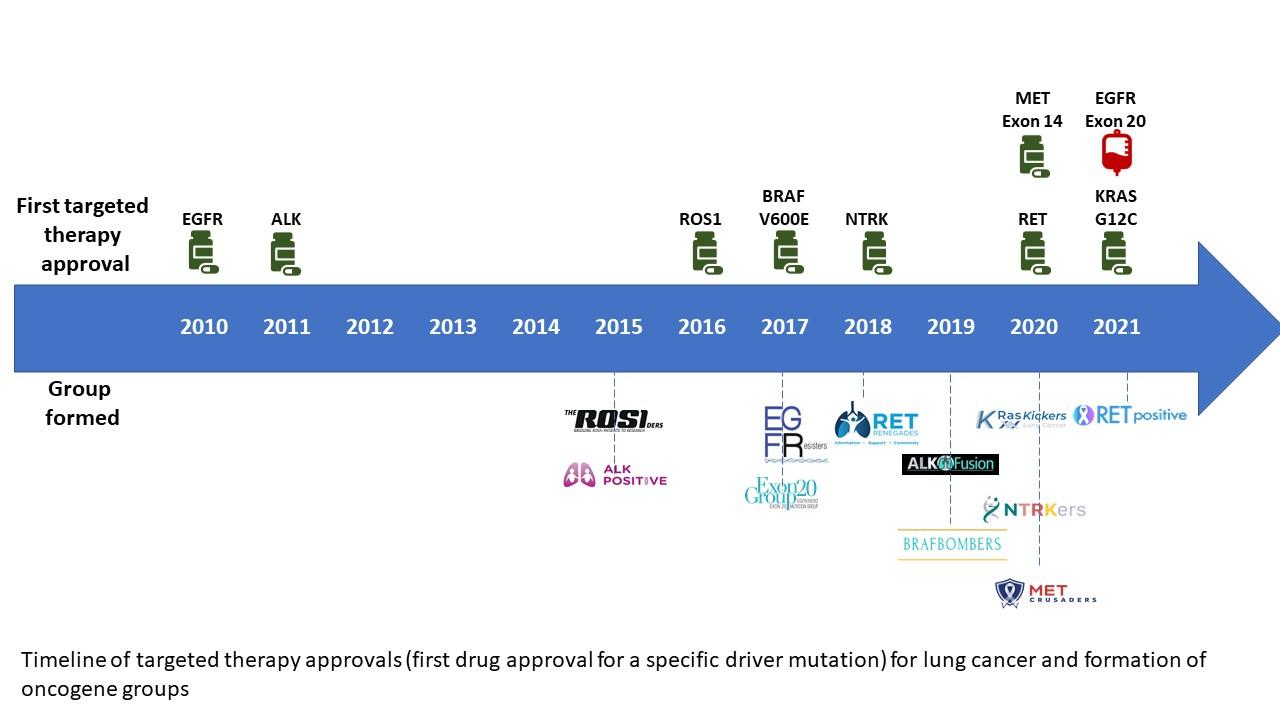 Survivorship in Lung Cancer: An Interview With Dr. Anne Katz

Ending Stigma in Lung Cancer: The IASLC Participates in a Collaborative Summit Held by the National Lung Cancer Roundtable