Prophylactic Radiotherapy: A Case for Patients at High Risk of Brain Metastases

Prophylactic Radiotherapy: A Case for Patients at High Risk of Brain Metastases

Prophylactic radiotherapy for the prevention of brain metastases (Table 1) has not been considered a standard practice outside of limited stage SCLC, particularly amid the surge and approval of novel targeted therapies that have shifted the outlook for patients with oncogene-addicted lung adenocarcinomas. However, a recently published randomized clinical trial is generating debate among clinicians who practice in diverse settings.

Foremost, it is important to stress that, despite all the current advances and therapies available in advanced NSCLC, brain metastases are still a considerable cause of morbidity and mortality for patients with lung cancer. It is recognized that up to 10% of patients with newly diagnosed NSCLC present with brain metastases, and the incidence increases throughout the course of the disease, having been tracked at 20% to 40% in various reports.1,2 Furthermore, it is well known that specific patient subgroups face a higher risk of brain metastases, including those with elevated carcinoembryonic antigen, ALK rearrangements, and EGFR mutations, with 50% to 60% of patients who have these characteristics developing brain metastases at some point during their disease course.1,3

As such, the continued search for strategies to prevent the development of brain metastases in patients with NSCLC has been a prioritized area of research for many years. Until recently, studies evaluating the use of prophylactic cranial irradiation in these patients had shown a significant reduction in the cumulative incidence of brain metastases; nonetheless, they had failed to show a significant benefit in terms of survival. In the recent update of the RTOG 0214 phase III trial, which compared PCI to “standard” observation in definitively treated stage III NSCLC, the authors showed a lack of survival benefit; however, other endpoints, including brain metastases at 5 and 10 years, were significantly lower in the prophylactic cranial irradiation (PCI) arm.4

In late 2010, researchers in the Thoracic Oncology Unit of the National Cancer Institute in Mexico recognized the pressing need to improve outcomes for patients at high risk of developing brain metastases. As a result, we designed the PRoT-BM study, with an innovative approach that included only advanced-stage patients at high risk of developing brain metastases, such as those with elevated carcinoembryonic antigen levels, EGFR mutations, or ALK rearrangements. In this randomized phase II study, patients were screened for inclusion, underwent initial systemic therapy (with either chemotherapy or first-generation TKIs available at the time, depending on molecular status), and were then randomly assigned 1:1 to receive PCI (25 Gy in 10 fractions) or observation. The study was amended in 2016 in light of new data and availability of technological resources, so that patients randomly assigned after that date received PCI with hippocampal avoidance. The schemes were chosen and carefully planned on the basis of previous data regarding efficacy and toxicity.5 The study, which recruited 84 individuals, showed for the first time that high-risk patients treated with PCI have a significantly reduced incidence of brain metastases at 24 months compared with those who undergo observation (7% vs. 38%) as well as improved OS (median = 64.5 vs. 19.8 months). Importantly, the patients did not exhibit detrimental effects on their quality of life or neurocognitive function associated with the intervention, as has been documented in other PCI studies.6 It is important to highlight that some PCI studies identified low-grade toxicity in neurocognitive function associated with the experimental arm; however, these studies used higher PCI doses and different fractioning schemas, as well as surgical approaches in addition to the radiotherapy.7

It is important to stress that, since this study was initially planned, numerous novel systemic treatments have emerged that have improved blood-brain penetration in patients with NSCLC and can therefore improve their brain outcomes without PCI. Nonetheless, the proportion of patients worldwide who have access to these agents is minimal, particularly in low- and middle-income countries. For example, in Mexico, where the PRoT-BM trial was designed and carried out, the monthly cost of osimertinib is approximately $170,000 MXN, whereas the daily minimum wage is $141.7 MXN. This means that a patient would have to work for 1,200 days (3.3 years!) in order to afford 1 month of treatment. Except for those with private health insurance, who represent less than 2% of the population in Mexico, treatment with novel-generation agents is basically inaccessible.8 Furthermore, patients without actionable mutations, such as those with elevated carcinoembryonic antigen levels, might still face a high risk of brain metastases. Lastly, resistance mechanisms are complex, and it is likely that brain metastases will still drive mortality despite use of third-generation TKIs with capacity to penetrate the BBB;  this issue should be carefully explored and strategies devised to decrease the incidence of neurologic death in these patients.

Most importantly, as an international community, we must understand the challenges and limitations faced by clinicians and patients worldwide. It is only through a global strategy that we will improve lung cancer care for every patient in every region.  This requires a broad outlook regarding what we have accomplished and the areas in which we are still lagging. 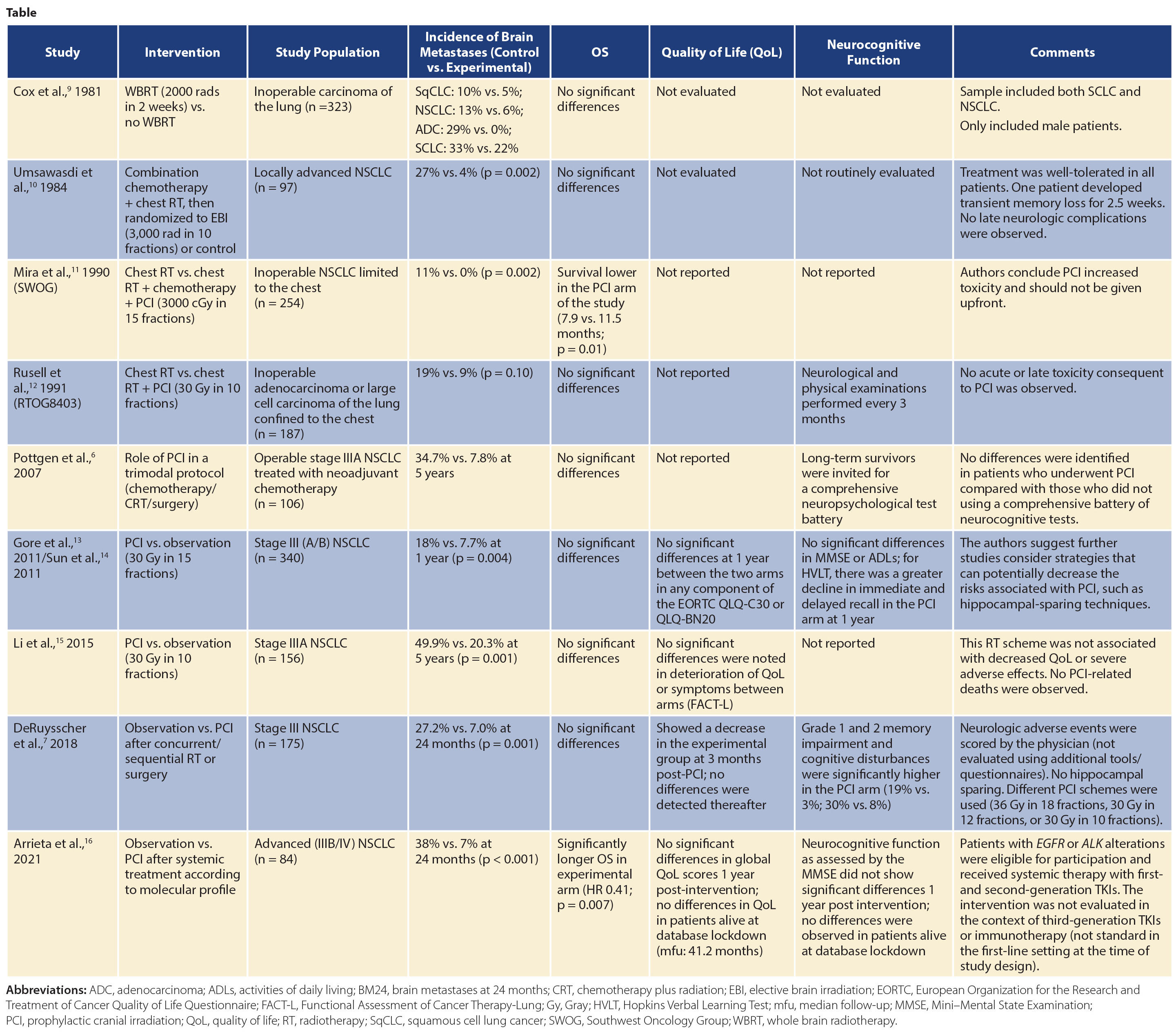 Spine Stereotactic Radiosurgery: A Critical Evaluation of the Evidence to Guide Clinical Practice

The Role of PORT in Patients With Completely Resected Stage III-N2 NSCLC: A Pro/Con - The Con Side

The Role of PORT in Patients With Completely Resected Stage III-N2 NSCLC: A Pro/Con - The Pro Side

Deeper Dive Toxicity of Lung SBRT and Concurrent Immunotherapy Combinations: What We Know and What We Still Need to Learn

The Dandelion Dilemma of Brain Metastases: Treating the Whole Lawn or the Weeds Separately