Small Steps Forward in SCLC: Is a Giant Leap on the Horizon?

Small Steps Forward in SCLC: Is a Giant Leap on the Horizon?

The absence of an OS benefit in more than 3 decades of clinical trials for extensive-stage SCLC (ES-SCLC) had become an all-too-familiar refrain among the introductions to numerous publications and grant applications. However, within the past 2 years, the publication of two landmark studies of immune checkpoint inhibitors (ICIs) in combination with frontline chemotherapy for ES-SCLC has heralded increasing, albeit cautious, optimism for SCLC investigation.1,2

The IMpower133 and CASPIAN trials successfully demonstrated OS benefits with the addition of the ICIs atezolizumab or durvalumab, respectively, to frontline platinum/etoposide, followed by ICI maintenance.1,2 This led to approval by the U.S. Food and Drug Administration (FDA) of both agents in this setting. In each case, however, the improvement in median OS was modest, approximately 2 to 3 months, with median OS only slightly greater than 1 year.

The still disappointing prognosis despite improved frontline strategies reflects not only the limitations of these new frontline regimens but also the dearth of subsequent options in refractory cases. Although a number of chemotherapy agents were routinely deployed in the second line for ES-SCLC, for many years, the only FDA-approved agent remained topotecan. Finally, in June 2020, the FDA granted accelerated approval to lurbinectedin for relapsed SCLC, providing broad access to a promising new agent. Lurbinectedin, a novel transcriptional inhibitor, was assessed in a phase II basket trial including an ES-SCLC cohort of 105 patients who had received one prior line of platinum-based chemotherapy.3 Impressive response rates were observed, including 35.2% in the overall population and 46.6% in those with platinum-sensitive disease (i.e., chemotherapy-free interval ≥ 90 days post-platinum). For cross-trial context, topotecan, the only previously FDA-approved therapy in this setting, demonstrated a response rate of only 24% in a comparable population (chemotherapy-free interval ≥ 60 days).4 In the overall population treated with lurbinectedin, median duration of response was 5.3 months, and median OS was 10.8 months. The OS in this second-line trial is impressive in light of the median OS of just 12.3 months for the frontline IMpower133 trial, which, along with the CASPIAN results, constitutes the current standard of care.1 Intriguingly, of the eight patients treated on this protocol with prior ICI exposure, five experienced confirmed responses with lurbinectedin.

Elsewhere in relapsed SCLC, durable responses with the ICIs pembrolizumab (KEYNOTE-158)5 and nivolumab (CheckMate-032)6,7 led to their approval in the third-line setting. However, the subsequent approval of frontline ICI has resulted in a steady decrease in the number of patients with ICI-naive, relapsed SCLC and limits the utility of pembrolizumab and nivolumab within their current approvals. Efforts to establish a greater role for these agents in ES-SCLC have failed to meet OS endpoints, including frontline chemoimmunotherapy with pembrolizumab vs. placebo (KEYNOTE-604),8 maintenance nivolumab plus ipilimumab following frontline chemotherapy vs. placebo (CheckMate-451),9 and second-line nivolumab vs. topotecan (CheckMate-331).10 Thus, at present, the role of ICIs in ES-SCLC is largely limited to the modest benefit observed with their use in combination with frontline chemotherapy. However, as in other solid tumors, tremendous efforts are ongoing focused on immune-based treatment including cell therapies, antibody-drug conjugates, bi-specific T-cell engagers, and antibodies targeting novel immune checkpoints.

Elsewhere, agents targeting DNA damage response and mitotic checkpoints continue to be the subjects of clinical investigation in ES-SCLC. PARP1, an enzyme necessary for double-strand break repair, is highly expressed in SCLC.11 A number of PARP inhibitors have been FDA approved for other cancers, including breast and ovarian cancers. A recent phase I/II trial of the PARP inhibitor olaparib in combination with the chemotherapeutic agent temozolomide in 50 patients with ES-SCLC, with relapse or progression following one or more prior lines of therapy, generated an objective response in 41.7% of patients, with a median OS of 8.5 months.12 More than half of the patients on this trial had received two or more prior lines of therapy, in contrast to the lurbinectedin study in which only one prior line of therapy was allowed. Another study again assessed temozolomide, this time in combination with the PARP inhibitor veliparib (or placebo) in 104 previously treated patients with ES-SCLC.13 Although the addition of veliparib, compared to placebo, resulted in significant improvement in objective response rate (39% vs. 14%), this failed to translate into an OS benefit. 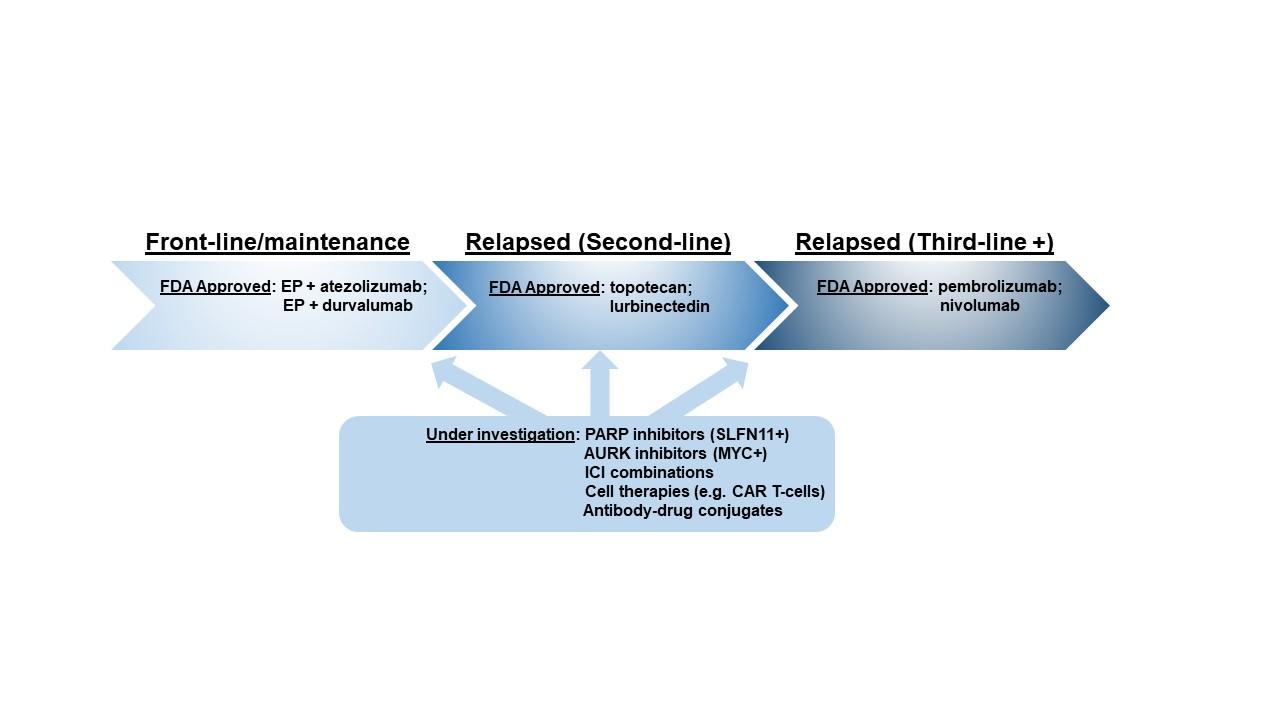 Unlike NSCLC, wherein genomic (EGFR, ALK, etc.) and proteomic (PD-L1) features guide the personalization of therapy, which has dramatically altered patient outcomes, SCLC has no standard predictive or “clinically actionable” biomarkers. As a result, every patient with ES-SCLC is essentially treated identically. Increasingly, preclinical data suggest that the genomic landscape of SCLC, with its nearly ubiquitous loss of TP53 and RB1, may fail to yield candidate targets.14 However, other molecular analyses highlight the tremendous intertumoral heterogeneity at the gene- and protein-expression level. A recent collaborative effort has characterized the SCLC landscape as consisting of four distinct molecular subtypes defined by differential expression of several transcription factors, including ASCL1, NEUROD1, and POU2F3.15 Each subtype is defined not only by its specific transcription factor but also by differential expression of putative therapeutic targets and predictive biomarkers.15,16 Further highlighting the importance of exploring expression-based biomarkers, an exploratory analysis in the veliparib/temozolomide trial mentioned previously found that detectable expression of Schlafen-11 (SLFN11), a putative biomarker of PARP inhibitor benefit,17,18 predicted significant improvements in PFS and OS in patients treated with the veliparib/temozolomide combination.13 Another trial, which investigated paclitaxel in combination with alisertib, an inhibitor of the mitotic checkpoint Aurora kinase A, or placebo yielded a significant improvement in PFS among those tumors with detectable expression of c-Myc.19 Like SLFN11, the predictive benefit of c-Myc expression applied only to the experimental arm.

The next steps in SCLC research will include prospective validation of these putative biomarkers along with rational combination strategies. Encouraging preclinical data suggest that in SCLC models, PARP inhibitors and ICIs act synergistically due to PARP-inhibitor–induced activation of the Stimulator of Interferon Genes pathway and resultant PD-L1 upregulation.20 Trials to assess these hypotheses are on the horizon, including the recently activated SWOG 1929 trial, which will randomly assign patients with SLFN11-positive disease to maintenance atezolizumab with or without the PARP inhibitor talazoparib following the standard-of-care IMpower133 frontline regimen. The initial strides with chemoimmunotherapy, lurbinectedin, and DNA damage response provide some reason for optimism, but, moving forward, it is essential to determine how these and other agents interface with the molecular landscape of SCLC.

Fig. 1. Summary of Approved and Selected Investigational Therapies for SCLC

About the Author:
Dr. Gay is an assistant professor of Thoracic/Head & Neck Medical Oncology at The University of Texas MD Anderson Cancer Center.

Dr. Gay is an assistant professor of Thoracic/Head & Neck Medical Oncology at The University of Texas MD Anderson Cancer Center.

Telehealth: Bridging the Digital Divide Is Still a Work In Progress

Conducting a Lung Multidisciplinary Tumor Board at the National University Cancer Institute, Singapore