Decade in Review: Changes in Smoking Behaviors Are Altering the Clinical Picture of Lung Cancer

Decade in Review: Changes in Smoking Behaviors Are Altering the Clinical Picture of Lung Cancer

Lung cancer still holds the top position worldwide in terms of the number of new cases and deaths each year, which in 2018 reached 2.1 million and 1.8 million, respectively.1 Given that roughly 85% of all lung cancers can be traced to cigarette smoking, many countries have sought to rein in the morbidity and mortality of the disease by implementing public health initiatives and tobacco control policies. Most notably, the Framework Convention on Tobacco Control, an international tobacco control treaty from the World Health Organization, entered into force in 2005 and boasts more than 180 countries that have signed on to support provisions to reduce tobacco demand and supply.2

“Population-based interventions are essential for reducing tobacco use and secondhand smoke exposure,” said Brian King, PhD, MPH, deputy director for Research Translation, Office on Smoking and Heath at the U.S. Centers for Disease Control and Prevention. “Proven population-based measures include increasing the price of tobacco, implementing comprehensive smoke-free policies, implementing hard-hitting media campaigns, and increasing access to cessation services.” Beyond this, other strategies advocated by the World Health Organization as part of its MPOWER measures include monitoring tobacco use and prevention policies and enforcing bans on tobacco advertising, promotion, and sponsorship.3

The effectiveness of these efforts is generally slow to emerge given the 20- to 30-year lag between smoking prevalence and lung cancer mortality, but positive changes are evident.4 According to the 2014 US Surgeon General’s Report,5 “in the United States, the prevalence of smoking among males has declined since at least the 1950s, but age-adjusted death rates for lung cancer among men did not begin to decline until approximately 1990. Among women, the comparable death rates peaked around 2003 then significantly declined, likely due to considerable success in reducing the prevalence of smoking among women.” More recent global data from the World Health Organization revealed that 86% (42 of 49) of evaluable countries demonstrated decreases in lung cancer mortality from 2000 to 2016.6 Notably, 91% of the countries with declining lung cancer mortality showed decreasing tobacco use among men and 82% showed decreasing tobacco use among women. In contrast, among the countries with increasing lung cancer mortality, only 60% and 30% showed decreasing tobacco use among males and females, respectively.

In the wake of successful tobacco control endeavors, lung cancer demographics are beginning to shift in sometimes unexpected ways by histopathologic subtype, sex, and age, and it is important for the healthcare community to take note in order to optimize lung cancer prevention and management. 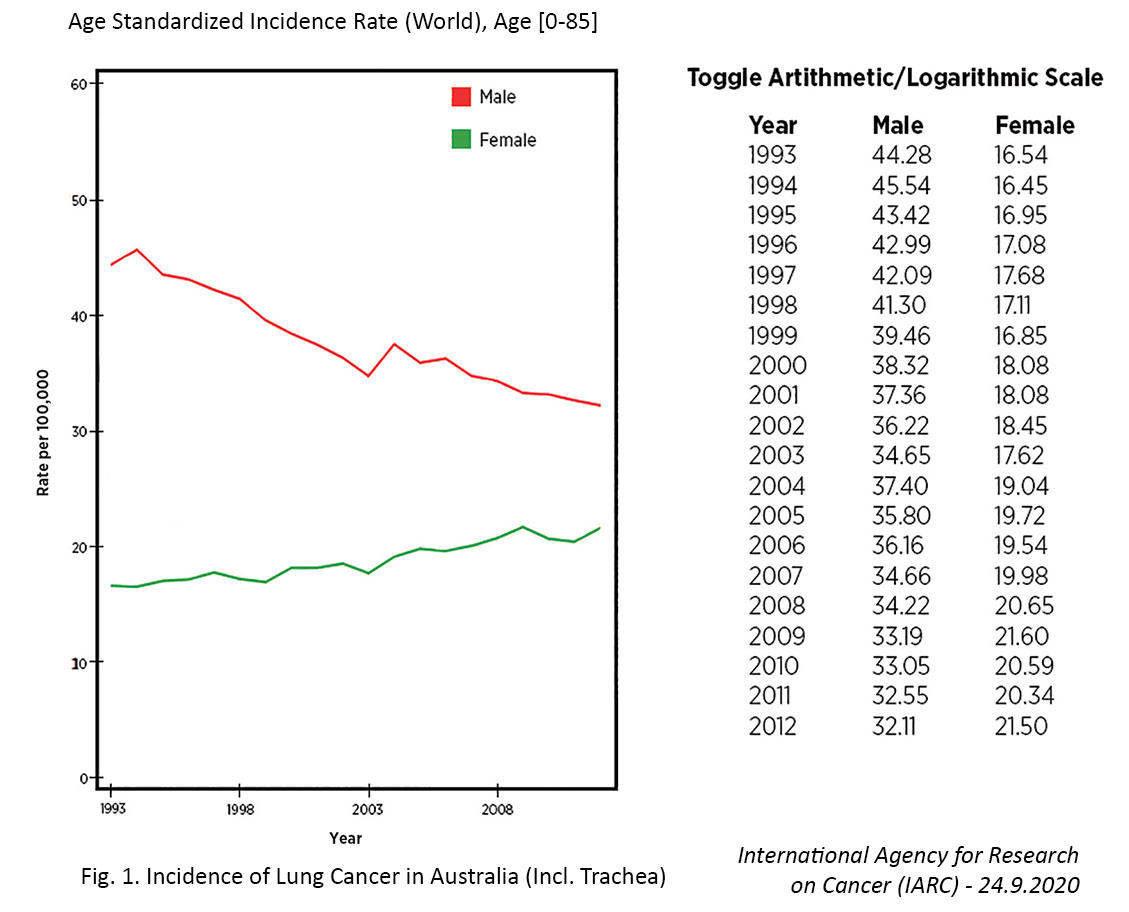 Exposure to tobacco smoke and other inhaled carcinogens greatly influences tumor histopathology. Squamous cell carcinoma (SCC) and SCLC are almost exclusively tied to smoking, whereas adenocarcinoma is linked to multiple causes, including smoking, air pollution, radon exposure, family history, and other factors. In concert with declines in smoking prevalence, many regions have reported a decreasing incidence of SCC over the past few decades juxtaposed with a progressive increase in the incidence of adenocarcinoma among both individuals who smoke and those who do not.7-9 The incidence of other lung cancer subtypes, such as small cell lung cancer and large cell carcinoma, demonstrates wide variability in different regions of the world.

The predominance of adenocarcinomas over SCCs in North American and European countries began to emerge in the late 1980s and early 1990s.8 This shift is attributed, in part, to changes in cigarette design and smoking behaviors that began years earlier during the 1960s and 1970s. During this period, tobacco companies began to manufacture “light” cigarettes featuring lower levels of tar and nicotine and marketed them as a “safer” cigarette option. However, the machine based method for measuring tar and nicotine yield failed to account for variations in smoking patterns among people.10 Some individuals who switched from higher- to lower-tar cigarettes tended to compensate for the reductions in nicotine by inhaling more deeply or holding the smoke in the lungs longer, enabling carcinogens to reach distal areas of the lung where adenocarcinomas arise.8 Around the same time, Western tobacco companies also started incorporating reconstituted tobacco into cigarettes, in turn increasing nitrosamines, which are implicated in adenocarcinoma development.

Similar shifts in adenocarcinoma predominance are now emerging in Eastern countries such as China. For example, the average amount of tar in Chinese-made cigarettes decreased from 27 mg in 1983 to 17 mg in 2000 to 12 mg in 2010.9 Following on the heels of these changes, the incidence of SCC has decreased and the incidence of adenocarcinoma has steadily increased among both smokers and nonsmokers since 2000, with the latter now comprising the majority of all lung cancer cases in China.8,9 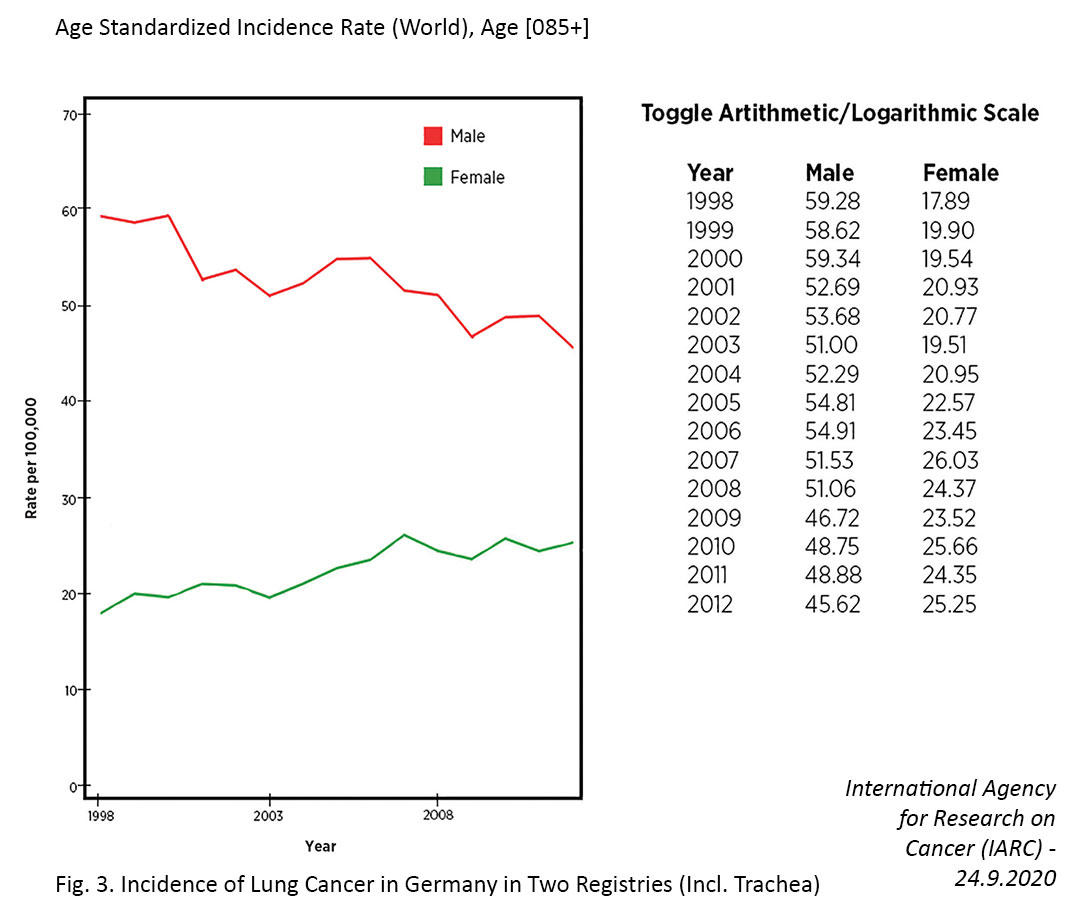 Changes Based on Sex and Age

Similar findings have been observed in China based on incidental detection of lung cancer through the use of low-dose computed tomography (LDCT) screening, which is often utilized in low-risk populations regardless of age and smoking history. In a study in which LDCT was performed as part of a routine health examination in approximately 8,400 healthcare workers, lung cancer was incidentally detected in 179 individuals (2.1%), with higher detection rates in females versus males (2.5% vs 1.3%) and nonsmokers versus smokers (2.2% vs 1.4%).13 Notably, 96% of the tumors presented as ground glass opacities (GGO) on the LDCT scans, and 54.2% of the lesions occurred in individuals aged 55 years or younger.

“It is still unclear whether the increasing trend of lung cancer in young female nonsmokers can be attributed to early detection by LDCT or a true rise in incidence,” stated lead researcher Haiquan Chen, MD, the director of the Lung Cancer Center at the Fudan University Shanghai Cancer Center. “Our findings should raise global attention to the identification of risk factors associated with young, female, nonsmoking lung cancers. Epidemiologists, doctors, geneticists and basic science researchers should work together to clarify the etiology.” Although the potential risk factors for nonsmokers include exposure to secondhand smoke, outdoor air pollution, and indoor air pollution, such as that from burning wood, coal, other solid fuels, or kerosene for heat in poorly ventilated houses, these factors do not seem to be responsible for the rising lung cancer incidence in young female nonsmokers based on preliminary research results of Dr. Chen and his colleagues. 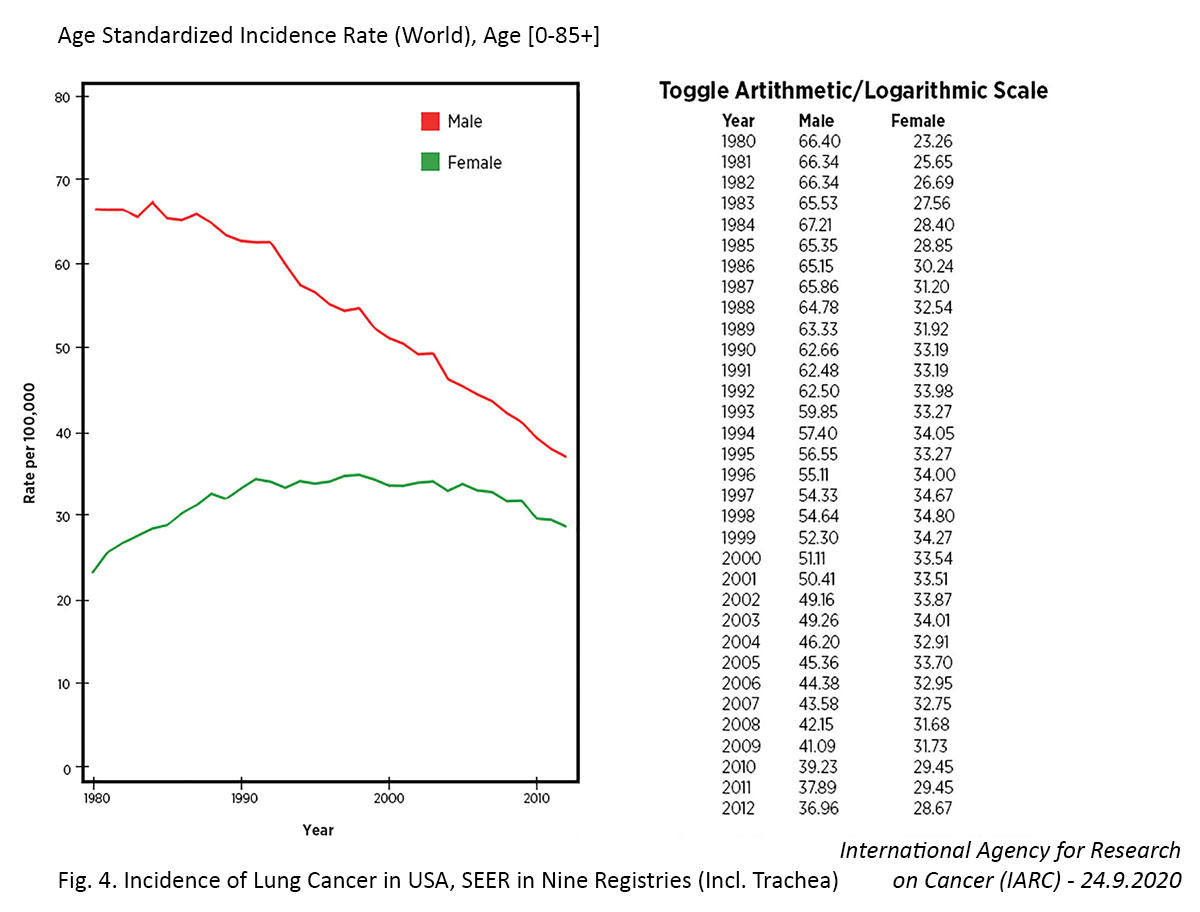 Although lung cancers featuring GGO at presentation are generally indolent and tend to progress slowly, Dr. Chen warned that he and his colleagues “have seen some cases progress into aggressive part-solid or even solid tumors. Some GGO nodules progress quickly, while others grow very slowly. We still cannot reliably distinguish between fast-progressing and slow-progressing nodules.” He further added, “Even lung cancers with a GGO component can have mediastinal lymph node metastasis. Based on our research, once there is lymph node metastasis, lung cancers with a GGO component have an equally bad prognosis to their
solid counterparts.”

This and other work raise concerns about limiting LDCT screening for lung cancer to older, long-term smokers, as is currently done in many Western countries based on the results of the National Lung Screening Trial and the NELSON trial.15,16 Screening eff orts may require more refined tailoring based on age, smoking status, and ethnicity, among other factors, carefully weighing the need for screening to avoid overdiagnosis and overtreatment.