Although about 20% of those who die of lung cancer in the United States each year have never smoked,1 only individuals with heavy smoking histories are eligible for low-dose CT screening that can identify disease at an early stage, when curative treatment may be possible.

As never-smoking populations grow in the United States and Europe, it is reasonable to consider the value of expanding screening to these individuals. But what strategies can identify those most likely to benefit despite concerns such as overdiagnosis and financial cost?

Looking Beyond the Current Landscape

Dr. Amos noted that the United States Preventive Services Task Force recommends low-dose CT screening for people ages 50 to 80 who have had 20 pack–years of smoking exposure. In addition to current smokers, individuals are eligible if they fit into those categories and stopped smoking within the 15 years preceding their screening. These guidelines are projected to reduce lung cancer mortality by 12%, but only 23% of the population is eligible, Dr. Amos said.

Expanding screening outside that population must be considered carefully, he said, because “low-dose CT conveys some risks from radiation exposure, and also overdiagnosis and subsequent unnecessary biopsies and treatment.”

Currently, identifying the individuals who do not smoke but who might benefit from screening is difficult. “While genetic markers, serum biomarkers, and circulating cell-free DNA can identify potential lung cancer cases,” Dr. Amos said, “they are expensive, and the value of their application in [people who have never smoked] is unclear.”

That is why finding better biomarkers for the risk stratification of these individuals will be crucial, he said.

Choosing Subgroups That Will Benefit

In a paper published in Cancer Research in January 2021, Dr. Amos and his colleagues assessed the risks of lung cancer in people with and without family history of the disease, and according to sets of genetic biomarkers expressed as polygenic risk scores.

Among those who have never smoked, they found that “even the highest-risk individuals have only a 0.3% five-year risk of developing lung cancer,” Dr. Amos said. “On the other hand, among [those who currently smoke], the highest-risk individuals with family histories have risks approaching 25%. There’s no case where never-smoker populations reach risks that would qualify them for screening.”

However, there are a number of genetic syndromes that increase risk substantially for certain individuals who have never smoked (Figure). 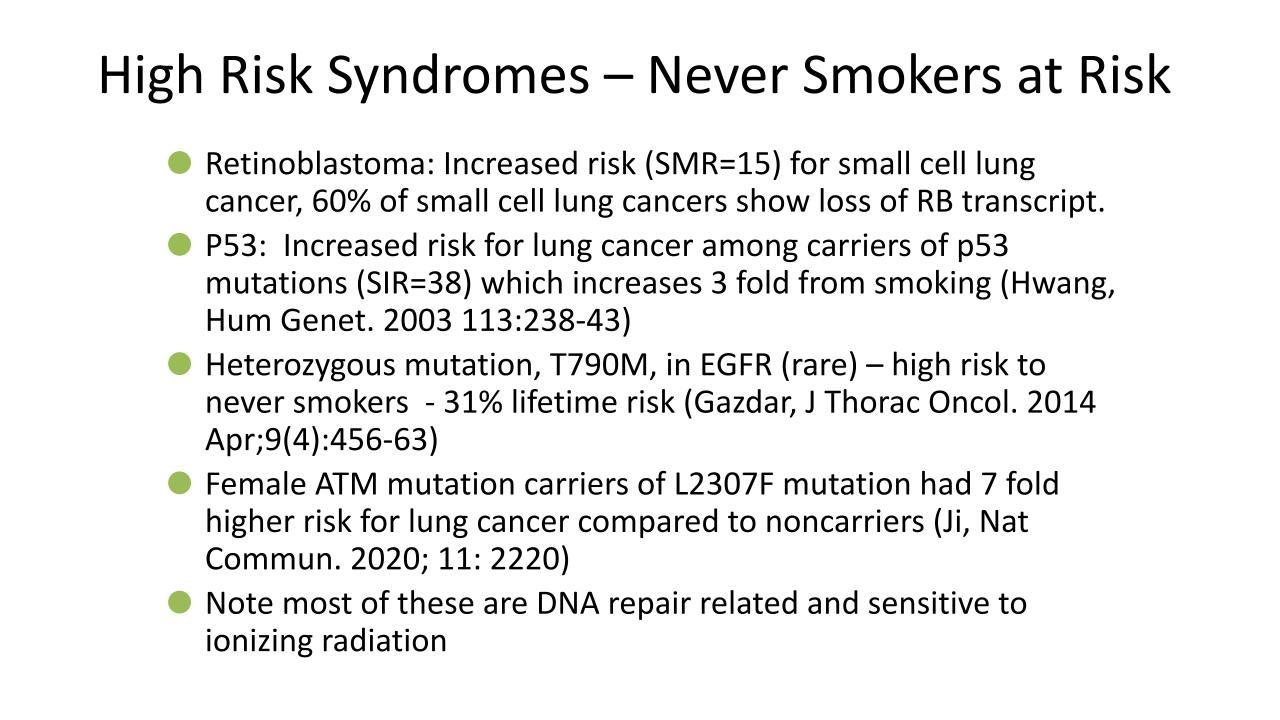 When considering screening in people with these syndromes, he said, it is important to know that those with retinoblastoma, p53, and ATM aberrations face an even higher risk of developing lung cancer if they are exposed to ionizing radiation; thus, for them, MRI is likely a better screening approach than low-dose CT.

In Asia, low-dose CT screening has been applied to large populations, including individuals who have never smoked. A 2020 study published in the European Respiratory Journal, which discussed the risks and benefits associated with CT screening in individuals who did not smoke within Asian populations, noted that smoking affects lung cancer risk less in Asia than it does in Europe or North America—perhaps because pollution plays a bigger role than cigarettes there, Dr. Amos said.

“Studies there do show a significant stage shift to an earlier stage, arguing that low-dose CT is improving outcomes, but these studies, to my mind, are not comprehensive,” he said. “The benefit of screening has not been carefully evaluated with respect to overdiagnosis and cost benefit in these populations, so ongoing studies in Asia are needed to show a benefit.”

For now, screening for individuals who have never smoked is not recommended in Western countries, and Dr. Amos said he will not consider low-dose CT a workable strategy for this population “until we can develop biomarkers that can be inexpensively applied and have shown benefit.”