Atezolizumab was well tolerated, and no new safety signals were identified. In their current presentation, the investigators examined the impact of therapies prior to adjuvant atezolizumab, including the extent of pulmonary resection, the type of mediastinal nodal assessment and adjuvant chemotherapy regimens, on disease-free survival. These pre-randomization variables as well as the time from surgery to adjuvant treatment are topics of interest, according to Nasser Altorki, M.D., of New York-Presbyterian Hospital, Weill Cornell Medicine in New York City.

Surgery type, disease stage, mediastinal nodal assessment, and cisplatin-based chemotherapy regimens were well balanced between the atezolizumab and best supportive care arms. In the ITT population, the most common surgery was lobectomy (78.1%); 15.9% had pneumonectomy and 5.0% had bilobectomy. Mediastinal lymph node dissection or sampling was performed in 80.7% and 18.0% of patients, respectively. The majority of patients (76%-95%) across different chemotherapy treatments in both arms received the planned 4 cycles of chemotherapy.

In the ITT population, median time from surgery to first atezolizumab treatment or best supportive care was 5.2 months (range, 2.4-7.7) and 5.1 months (range, 2.3-8.0), respectively. In this exploratory analysis, the forest plots showed that disease-free survival in the PD-L1 TC ≥1% stage II-IIIA and all-randomized stage II-IIIA populations favored the atezolizumab vs best supportive care arm across most disease stages, surgery types, and chemotherapy regimens. 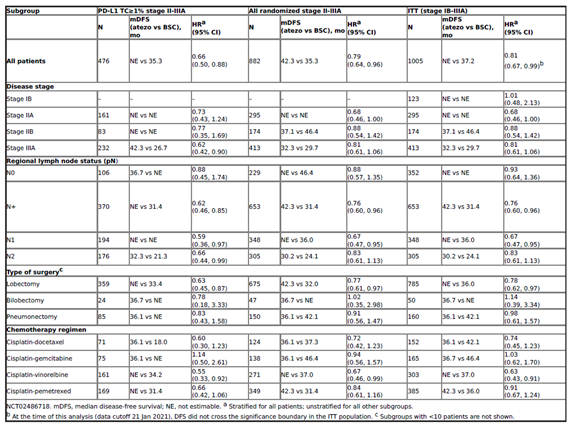 The International Association for the Study of Lung Cancer (IASLC) is the only global organization dedicated solely to the study of lung cancer and other thoracic malignancies. Founded in 1974, the association's membership includes more than 7,500 lung cancer specialists across all disciplines in over 100 countries, forming a global network working together to conquer lung and thoracic cancers worldwide. The association also publishes the Journal of Thoracic Oncology, the primary educational and informational publication for topics relevant to the prevention, detection, diagnosis, and treatment of all thoracic malignancies. Visit www.iaslc.org for more information.

The WCLC is the world’s largest meeting dedicated to lung cancer and other thoracic malignancies, attracting more than 7,000 researchers, physicians and specialists from more than 100 countries. The goal is to increase awareness, collaboration and understanding of lung cancer, and to help participants implement the latest developments across the globe. The conference will cover a wide range of disciplines and unveil several